Celebrating the fifth anniversary of Koprivnica championship as one of the best competitions in Croatia, the national minifootball team played international friendly match against Slovenia with whom they already faced in miniEURO group stage. As soon as the game was announced so many people wanted to be part of this event.

Along with the international friendly, an official game of Koprivnica championship was arranged, as well as the game for regional champions with champions of Koprivnica and city of Križevci facing each other. Due to  many requests from spectators the match was moved into city arena and was played not on artificial grass but on wooden floor, something different that players in Croatia ware used to, but when the players came to warm up before the match they saw over 2000 people cheering for them they immediately adapted to new surface.

The show started at 14:00 hours with rich program including cheerleaders, official mascot, dance groups, and much, much more what kept big crowd happy and it was one of the biggest sport events in city’s history.

As a part of the official programme exhibition game was played where selection of Koprivnica championship (over 33 years of age) played against the Slovenian national over 33 team. Amongst the representatives of the Koprivnica team president of Croatian minifootball federation Bruno Alpeza and national team coach Danijel Knežević, while Slovenian minifootball Association President Andrej Manfreda played for his country. 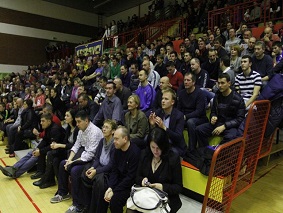 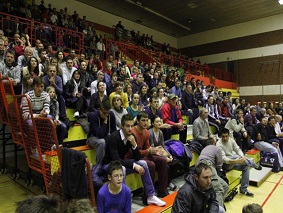 Before the event Croatia goalkeeper Marko Mihaljević who was injured in the miniEURO semi-final match, received ”the Braveheart” award for most committed national player. Unfortunately he’s still injured so the only watched the match from substitutes bench.

This event was real proof that minifootball is step by step becoming one of the most important sports in Croatia, recognised by people and players, so it doesn’t surprise that national team is invited to be guest of two large minifootball tournaments in January and to play friendly matches in front of large crowds. Already in Križevci they want to host Croatia national team and have demands for over 1500 spectators, more than their hall can hold.