The Czech team has finished preparations for the upcoming World Cup in the USA. The coaches tested 24 players who all participated in a two-day training camp in Prague where they played four friendly matches against local teams. The main aim of the camp was to test the force before the World Championship and to get to know each other on the pitch. The results of the matches were not so important though the national team was quite successful and defeated all four opponents.

The coaches could choose from:

Here are the results of the four matches including scorers 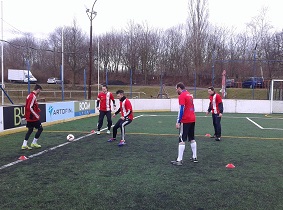 The Czech management managed to prepare a pitch according to the regulations of the American Organizing Committee which meant especially larger goals than we are used to in Europe and sideboards. Therefore the players could try the same conditions under which the teams will play in Ontario and San Diego. The head coach Radek Pokorný and the general manager Luděk Zelenka (a former prolific goal scorer who played for various top Czech clubs during his career) added some new players to the team from the last European Championship and finally made the nomination for the World Cup.

The Czech team certainly deserves attention because the Czech Republic is the second best team in Europe in the European Minifootball Federation rankings. At the last European Championship in Montenego the Czech team only lost the semi final match against the title defenders from Romania. In a duel for the bronze medals Czech players found more will to win the precious metal and defeated Germany 2:1.

Let us hope the footballers will confirm their long-term good results even this year. They will play in group A together with El Salvador, Kazakhstan and the USA. The whole team is really excited because they have never had a chance to play against these opponents in history. The Czechs will play their first two matches with El Salvador and Kazakhstan in Ontario near Los Angeles and for the last game in group A they will move to San Diego where they will face the home team of the USA.