England set eyes on the title

After a couple of years in the wilderness, the home of Football are back competing at the EMF Euros, speaking with the EMF ahead of next month’s Euros in Kiev, GB MiniFootball Union President Mark Staines gives us his thoughts on the England teams preparation and chances at the tournament..

– It will be the first year for your team at the EUROS, what are your expectations? – We know how difficult it’s going to be, we’re not under any illusions about the challenge ahead, but we’re going there to win it, not just to make up the numbers, but saying all that, the target is to qualify for the World Cup, and then beyond that, who knows what will happen!.

– You have played 2 warm up games, the first was against the World Champions and the second against Belgium, have you managed to find your perfect squad? – The Management team are happy with their squad, but we know there’s room for improvement, we’ve won our last 3 games and the squad is progressing well, but the management will always be looking to strengthen the squad where they can, that’s only natural.

– Who is the star of your team? – Everyone in the squad is just as important as each other in their own right, however, we have Sam Hurrell, former winner of Sky TVs ‘Football Icon’, Luke Griffin has definitely improved markedly since joining up with the squad, but I would say James McCluskey is our most influential player.

– You have very strong group, do you believe you can find weaknesses in the opposition and capitalise on them? – We have a very tough group, we have the most successful team in European history, and we have a fast improving Spanish team that finished 4th at the last World Cup, but we don’t fear any of the teams, we respect them all, and we’ll do our homework on each country, and try to pick out weaknesses to try and exploit them, but we need to be on top of our game to get through a very difficult group.

– What are your predictions for your team at the event? – I don’t want to make any predictions to how far we’ll go, as it puts unnecessary pressure on the team, but I think we’ll be very competitive, and cause a few raised eyebrows along the way.

– Let’s have a bet, tell me the top three teams at this years tournament? – My head says Czech Republic, Kazakhstan & Spain, but my heart says England, Czech Republic & Kazakhstan.

– I know that you participated in a charity match, tell us about it? – There was a charity tournament for a young boy in London called Jayden Powell, Jayden requires treatment very often in Germany, so we sent the England team along to support the event, and to help raise money, we won the tournament, but in a surprise twist, we had to play a group of 6/7 year old kids for the actual trophy, and the experience of the kids and their physical strength saw them defeat us and walk away as champions ?

– Tell us about your development for the year ahead, how many leagues do you have? – Development is going very well, we have just signed a big partnership for 3 years, we have numerous other sponsors, so their support as helped massively, we have a sports media company with 26 million followers wanting to come and make a video of the team and show it to their followers, the armed forces want to play us in a friendly to show their support to the team also, and we’ve just agreed a partnership with another big name and they will promote Minifootball across England, and provide photographers, media teams, reporters etc as well as set up regional leagues and national tournaments. We currently have 4 leagues of our own, including the strongest league in the UK, and around 8 affiliated leagues, but this will increase significantly in the coming year as everyone now wants to work with us as we continue to grow. – Will your Minifootball team get closer than your 11 a side team in their quest to finally bring it home? – It’s coming home 😉. That’s the plan, we have no idea what will happen, but we’re going there to bring it home! 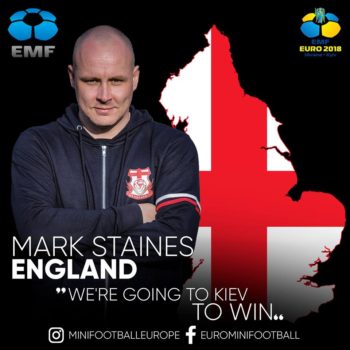