Kilkenny: The Kings Of Irish Minifootball

A 6 a side soccer team from Kilkenny was left celebrating at the weekend as they beat teams from all over Ireland to be crowned as National Champions.

The side – who were proudly representing their town – defeated Limerick in the final, a victory that was made all the sweeter given that runners up had home advantage.

The championships took place at Limerick University on the state-of-the-art pitches and attracted entrants from localities all over Ireland, as well as the Irish National side who played some exhibition games during the event.

After battling through their group games, the Kilkenny boys were pitted against a team from Waterford, dispatching them 5-1, this tremendous form continued in the next round against a Dublin outfit, who lost by the same score.

These victories were enough to put them in a final against home favourites Limerick. A confident and classy performance from Kilkenny saw them take an early lead to run out 3-0 victors after a further strike midway through the game before wrapping it up towards the end and take the trophy.

The matches took place in front of many interested special guests, including the TD for Limerick City, Jan O’Sullivan, Minister For Housing (pictured below with Ireland President Declan Ford) who admitted she was “delighted” to see, what she termed an “important and prestigious” tournament in her city. “At the University of Limerick,” she said. “We have fantastic facilities. It is a great opportunity for players to showcase their skills.” 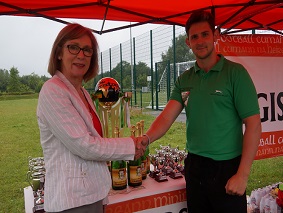 Another interested observer was the Irish National 6 a side Team boss, Lee Kill, who was on the lookout for players to add to the Ireland squad for the European 6 a side Championships. The best players from the tournament could find themselves on the plane to Israel to compete.  Ms O’Sullivan confirmed that she would be looking for the team’s progress and added that: “Hopefully some here will represent Ireland.”

The President of Irish Minifootball Association Declan Ford was a proud man as he watched the organisations first ever national event: “It was fantastic,” he said. “It was great that the Irish National team boss was able to be here, along with many of the best 6 a side footballers in the country. Our congratulations to Kilkenny who thoroughly deserved to win the event. Their composure in the final was superb and the way they navigated their way through the knockout rounds was quite incredible.”