The national teams from Germany, Slovakia and the Czech Republic met in Český Dub last week to play at a tournament called SIMOST Cup. The intention was to test the force before the upcoming miniEuro 2014. The Czech management was able to prepare the pitch according to the regulations of Monte Negro Organizing Committee which meant especially larger goals. Therefore all teams could try the same conditions under which the teams will play in Herceg Novi. The Czech Republic was divided into two teams because the coaches had 25 players available from which they intended to form a final nomination for the European championship. These are the rosters of the teams: 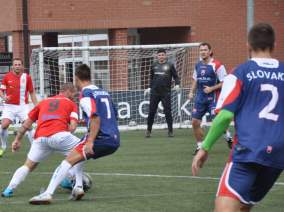 The German squad was supposed to be larger because, Fabian Diringer, Daniel Jagenburg, Sebastian Koch, Florian Thamm, Timur Abali, Markus Zalucki and Florian Loest were also supposed to come, but unfortunately they had been injured during previous weekend. The organizers were very pleased they could welcome the president of the German Minifootball Association, Mr. Christoph Koechy and his assistant Miss Julia Colter, a member of the tournament committee.

The Slovakian squad was formed of two main groups, in one group there were players from Bratislava and in the other there were players form Prešov. Some of the members of the delegation saw each other for the first time. They were accompanied by the general secretary of the Slovakian Minifootball Association, Mr. Javer Gusejnov.

During the final ceremony medals and cups were handed out by the President of World Minifootbal Federation, Mr. Filip Juda. He thanked the sponsors and appreciated the start of fruitful cooperation among the three countries in the field of minifootball.